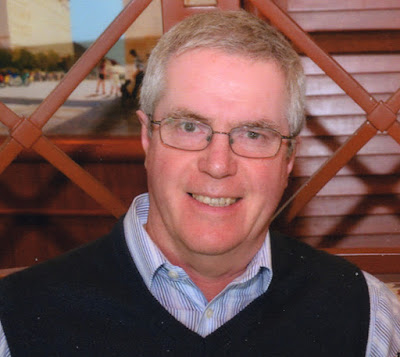 Retired teacher Geoff Semmens recalls his time as a teenager in Sully.

"I was five months with TB in Powys ward from November 1961 until March 1962 and I celebrated my 15th birthday there.

“ I got ten months off school but we survived which even in our day was not guaranteed.”

Acker Bilk’s visit to Sully- highlight of my stay

I have always been grateful that whilst at the height of his fame, when he could have rightly claimed the need to rest and recover from an arduous tour of the country promoting his greatest hit
"Stranger on the Shore", he and the Paramount Jazz Band offered their time to entertain 20-30 of us in a scruffy cellar at an isolation hospital. It was one of the "Highlights" of my stay at Sully.

“Stranger on the Shore”  held the record of being in the hit parade for the longest number of weeks. Acker, at the height of his popularity, was touring the country playing each evening to sold out concerts. The Band gave up their morning to visit Sully Hospital and play to a small audience of TB sufferers. They then visited other patients on the wards. There was no publicity surrounding it, no photographs nor journalists, just generous men giving up their time to give pleasure to others.

Christmas in Sully
“That was the only time in my life I had 3 turkey legs for dinner.”

Teenage friendship
"I was lucky in that another boy my age from Cardiff was admitted at the same time so we struck up a close friendship.

Hospital radio
"I remember the popular radio show run by a patient, who I thinks had been there for over ten years.

It’s a small world
“My consultant was Mr Forman. His daughter has been my GP in Llantwit but is now on the point of retiring.

Nursing and teaching and lessons in Sully
"We had a charge nurse, I think his name was English though I may be mistaken. His daughter was the head of French at the school I taught at in Bridgend.

"Coincidently my maths teacher also contracted TB at this time and was treated in Cefn Hirgoed Isolation Hospital. He later became a colleague and friend. Whilst in Sully there was a maths teacher from Newport who gave me lessons. On top of that there was the hospital tutor who gave us an hour each day and taught skills such as basket weaving.

"Do you remember the monthly sputum tests and the poor souls who had nasal tube inserted? ( The nasal tube was an advance- in my time the standard procedure was a gastric lavage which entailed swallowing several feet of orange tubing though I once did have  nasal tube after the nurse failed to get me to swallow the tube and beat me up into submission- Ann)

“I was fortunate in that my treatment was purely drugs. I had 123 strep injections, 246 PAS doses and 738 INA tablets.”
My friend who was with me in the early days, was readmitted a few months later, and had to have the op. Was that your treatment ?   ( Yes, I had a lobe removed and drugs- Ann)
After the op I remember the bandage tied to the end of the bed for the patients to pull themselves up.

I still remember the different styles of giving the strep injection and the stiff leg for hours after. No wonder I counted every one until prescribed picamycine shortly before discharge, those lovely flying saucer sachets in their blue tins.”

Geoff went on to have a successful career in teaching.
He says:
“ When I left Sully I went to   convalesce with my Grandparents in Llantwit Major.
“It was decided I would return to School at the start of the autumn term and would repeat form 4 (Year 10).

Played hockey
I was advised to avoid contact sports so played hockey to schools 'county level'.

Universities
I was accepted by the University of Newcastle Upon Tyne to study physics. It was whilst there that I had my only chest break down. I think I had over indulged my 21st birthday celebrations as I woke up coughing blood.

"Then I went to the University of Essex for a Master's degree in Quantum Electronics and whilst demonstrating in the undergrad lab discovered the thrill of teaching and was accepted at Cardiff University for my PGCE so completing a 300-mile equilateral triangle of Universities.

Assistant head
My first post was Assistant Physics Teacher at Bryntirion comprehensive school. I spent 33 (mostly) wonderful years at the school going on to be eventually Assistant Head.

Early retirement
My wife, Viv, was a senior university lecturer and we were both fortunate to take early retirement to enjoy the outdoors, looking after the grandchildren and various artistic endeavours. We now live in Llantwit Major in the bungalow next door to my Grandparents' home where I recuperated 56 years ago.

Health today
Recently, old age has been catching up on me. Firstly I have severe tinnitus that they think may have been a result of the heavy antibiotic (Streptomycin) treatment. Secondly I have angina, which causes some breathlessness that is not helped by mild airways obstruction. Considering the fate of those who caught the disease just 5 years previously to us, this is nothing to complain about.

Thank you Geoff for sharing your stories with us. 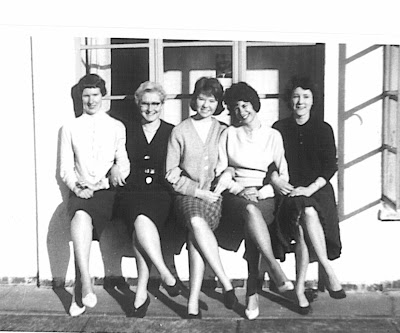 Photo: Staff outside the administrative office block -(from left to right)
Shirley Clogg (Paul’s mother), Pat Edwards, Diane, Enid and Gaynor Morgan
All  worked in the admin. department  except Enid who worked in the laboratory.

Shirley is still in contact with Diane who has lived abroad for many years.

Paul Russell from Barry, shares some of the stories that his mother Shirley told him about working in Sully in the 1950s.

It was like rabbit warren
My mother recalls entering the hospital on her first day of work in March 1954 at the age of 19, she remembers being daunted by the sheer size of the building saying it was like a rabbits warren with the many corridors leading onto other corridors. She did not want to venture too far from her office where she was working in the fear of being lost and never finding her way back!

Language from the laundry room
She would often take paperwork around the building where she met many people, from those in the huge laundry room to the sisters on the front desk at each of the wards, although she was not allowed any further than the sister’s desk.

She recalled how the language from the laundry room was quite choice as she approached but how they all hushed each other as they saw her coming and would then be nothing but polite and courteous towards her.

Grandmother admitted as heart patient
She did not often go on the wards themselves until one day when her grandmother Lilly Neale was admitted with a heart condition. She would often visit her during her lunch hour and recalled that the lady in the bed next to her grandmother never seemed to have any visitors so my mother would often sit with her.

The last haircut
She remembers the day when she was talking to the lady who was quite upset as she was having an operation that day. However, that is not what was upsetting her but the fact that she was due to have her haircut before the operation but the hairdresser had not turned up. Although no hairdresser, my mother offered to trim off the ends of her hair and went and got scissors from her office. The lady was delighted and my mother recalls her saying how thankful she was as she was a proud lady and wanted to look presentable for her operation.

My mother returned to see her later that day and was devastated to learn that she had died on the operating table... I could see that my mother was visibly upset recalling the memory.
Lunch on the lawns
Returning to nicer thoughts, she recalls that on hot summer days, her and the friends pictured in the photograph would often go into the wonderful grounds of the hospital and sit and have their lunch... These were truly happy days for her.

Thank you Shirley and Paul for sharing these memories with us.

"Searching for Sully - our stories"by Ann Shaw,  paperback,£9.99, available from Amazon
Posted by Ann Shaw at Saturday, March 24, 2018 No comments:

I am very grateful to Brian Lee, a journalist with the  South Wales Echo,  who sent me the following article  he wrote on Sully hospital on 2nd March 2018. 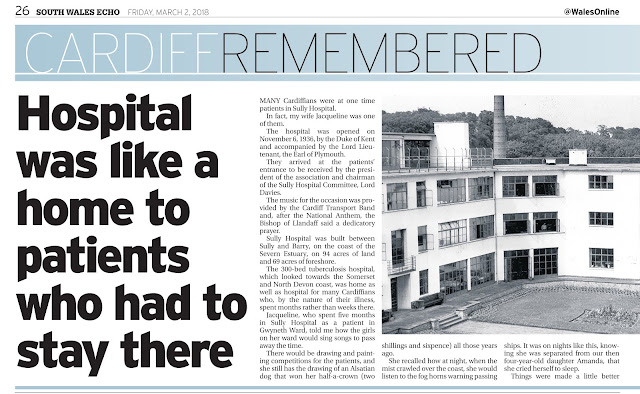 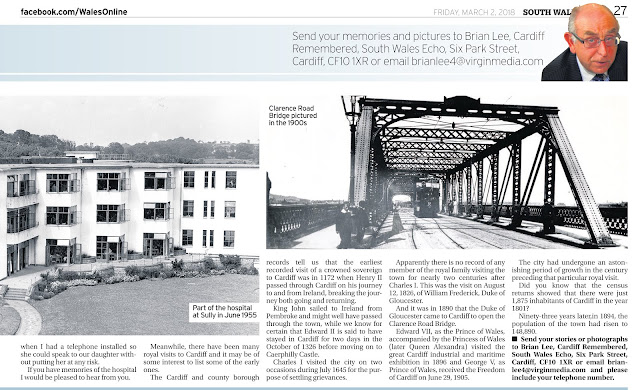